26th Annual Mardi Gras Upriver Festival in Jefferson Texas is Feb.6 – 8, 2015.
This years theme is TV Land. Can you believe it, I imagine so many favorite shows that would fit with that theme. I can’t wait to see what everyone comes up with. The Mardi Gras event in Jefferson TX is always so much fun, it is family friendly and a great festival to just get you out of that “winter dreary” feeling. Let’s have some fun!

Included in all the days activities and events there will be a Children’s Carnival, Arts and Crafts vendors and Food glorious food.

FRIDAY, FEBRUARY 6, 2015
On the Main Stage is RELENTLESS; Top 40 country music intertwining some Texas and Red Dirt country as well as some older rock classics. From 7 to 10 p.m.

DOO DAH PARADE begins at 7 p.m.
Wild, wacky and zany parade where everyone is invited to dress in the craziest Mardi Gras costume and join in the parade. Revelers begin at Lion’s Park; and weave their way throughtout downtown Jefferson and arrive at the Main Stage for the Alley Dance. Doo Dah Theme:  “Dancing in the Streets, Umbrella Parade” 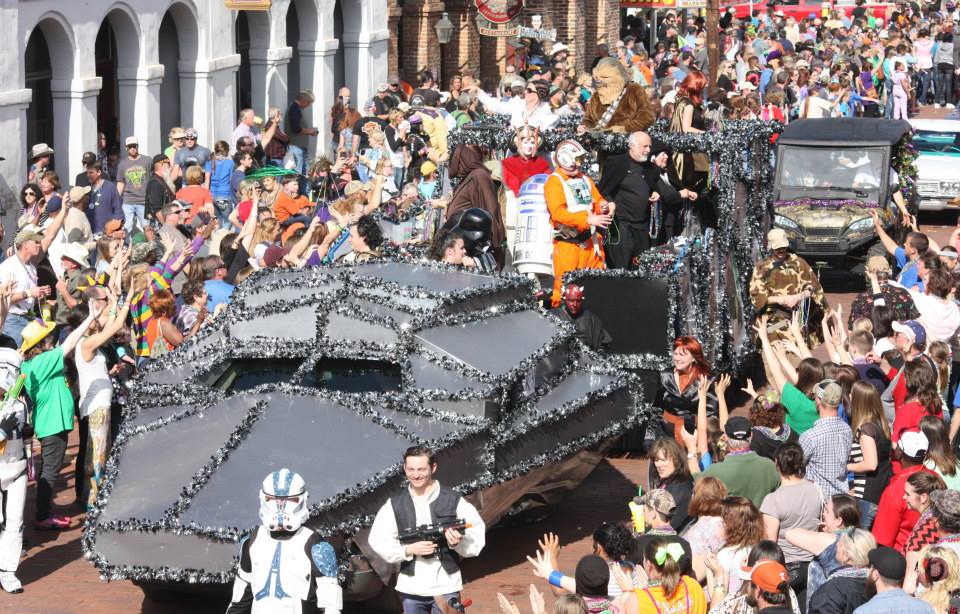 Star Wars themed float and people on this entry. Photo by the Jefferson Jimplecute

THE HIGHWAYMEN, The Ultimate Musical Tribute to Willie, Waylon and Johnny Cash, perhaps the greatest country music super group in history. From 3 to 6 p.m.

THE WONDERS,members of The Wonders have performed throughout the Dallas / Ft. Worth area for over 25 years. from 7 to 10 p.m.

PARADES:
Motorcycle Parade begins at 1:45 p.m.
Grand Parade is right after the Motorcycles at 2 p.m.

PARADES:
CHILDREN’S PARADE begins at 2 p.m. *Note a lot of the floats from Saturday will be in this parade too.

Highlights of the Mardi Gras Parade on Saturday in Jefferson Texas. Photo by Jefferson Jimplecute.